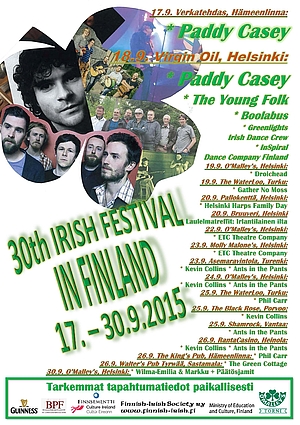 The Irish music festival in Finland has the great pleasure of welcoming one of Ireland´s most esteemed male music artists to head our Hämeenlinna and Helsinki concerts this September, starting in Verkatehdas, Hämeenlinna on the 17th of September and concluding at the Virgin Oil concert hall, in Helsinki, on the 18th of September.

Paddy burst onto the music scene in 1999 with his first album-So be it. It was voted best debut album by the Irish music press and the following year, his single Sweet Suburban Sky, was used as the soundtrack for the very popular TV series Dawson´s creek, He enhanced his growing reputation by supporting the legendary R.E.M and the Pretenders the same year.

Paddy ´s next album in 2003 called-Living Living-had 4 hit records and the album reached the top of the Irish charts. In 2004 and 2005 Paddy was voted best Irish male artist at the Irish music awards.

In 2005, Paddy had one of the highlights of his career when he supported one of the best bands in the world, U2 on their Vertigo tour. Paddy has performed on popular American TV shows, such as The David Leterman show and is a regular performer on Irish TV stations.

It is a great honour to welcome Paddy to The Irish Music festival in Finland.

Having established an ardent following in Dublin, Ireland’s foremost alternative-folk-pop band The Young Folk look to take Europe in 2015. The Young Folk is perhaps as much a philosophy as it is a name. Hardly a strict folk outfit, The Young Folk acknowledge their folky influences while asserting their own youthful personae with a self-composed alt-folk-pop live set that can include (but is not limited to) acoustic and electric guitars, piano, bass, drums, mandolin, banjo, trombone, melodica, xylophone, harmonica… The Young Folk add their own generational-spin to the legacy of Irish folk-influenced music – a legacy that principal songwriter Anthony Furey knows only too well, being the son and nephew of members of the legendary Fureys. While this influence on the band’s music is evident, younger audiences will also detect a youthful sound much more akin to The Young Folk’s contemporaries. The Young Folk have spent the last couple of years filling some of Dublin’s favourite venues, as well as tours in the UK, USA and Canada, and performances at SXSW, MIDEM, Cambridge Folk Festival, Electric Picnic and others. They’ve bagged support slots for Midlake and Imelda May, and recently played The Whiskey Sessions alongside I am Kloot, Gomez, Turin Brakes, Badly Drawn Boy, British Sea Power and Jon Allen. In 2014 they were invited by Caffè Nero in the UK to perform a series of showcases, winning a legion of new fans in the process. The Young Folk are now on the cusp of entering the studio to record the follow up to their debut album The Little Battle, released in 2014. Perhaps further eschewing the folky sound they started out with, the new material may see the band embracing new genres with increased fervour.